Launched and Released © 2014 by Janet Brugos

The year 1990 holds much for the world to contemplate. It was a year of explosive launches, connectivity launches, creative launches and the ultimate release of a beloved world leader.

In this work I’ve translated those states into textured layers, the radiance into colors seen by the Hubble spacecraft. As visual reference I use images of what Hubble has seen and Mandela face in different situations. To represent the world wide web I simply constructed the www. Creative launch is keyed in as the Grand Palais Museum in Paris, France where I presented my art to the public.

I work with a water media background to which I add handmade paper, fabric, bits of found or forgotten objects.

I improvise and float the layers over a period of days, adding and subtracting color and texture. I refine the composition by moving the groupings around or completely off the paper. Each day I leave the work, cover it and contemplate the whole in my mind. It evolves over a period of time until the layers find their own altitudes and the colors their own latitude and the textures their own longitude.

The artwork starts in my mind as I research for events that have happened in the year 1990. I print copies of the face of Mandela as he rides with Queen Elizabeth, as a face that peers out of prison bars, as he reflects on “Notes to the Future”.

Then the world wide web has brought knowledge to our fingertips. How could I represent that?  That was the easiest of all with the simple letters. I had started to use a type of gold decorative ribbon but eliminated that as it seems overly contrived.

I ended up with constructing the letters from handmade marbled paper– representing the interwoven  information on the web and outlining them with thread.

Just in case these forms and figments of my artistic spirit were not enough to indicate what year I was representing, I put in the numbers 1990. I cut and patched pieces of red fabric and a piece of a batik to form the numbers.

My personal creative launch was to show at the Salon Des Independants at the Grand Palais Museum in Paris, France. The Grand Palais was my canvas to start my career as an artist. I felt deeply moved by history as I brought in my two pieces in late 1990. The Museum is so massive and it glass roof and form always intrigued me. If you look at my images for representing the Grand Palais, it started out as a simple piece of fabric that represented the lines of the glass roof. That seemed so blatant that I covered it with an open type of handmade paper and outlined some of it with a pale blue ink. That did not seem right so I settled on using bits (of the universe from the whirlpool galaxy in my mind) torn, cut and constructed marbled paper to represent a nebulous building and grounded the building by outlining the roof with black thread. I chose to place by signature at the foot of the Grand Palais to pay homage to my birthplace as an artist.

I took photos along the way to keep track of my progress.  You can have a look.

This artwork is a part of a current exhibit  running through July 11, 2014 . See previous post  85 Years 85 Artists  for information on the exhibit at Menlo College.

A visual history of how the details for the numbers changed :

How the Grand Palais began, changed and evolved:

A visual history of the www:

Mandela’s face and the insertion of the Whirlpool Galaxy: 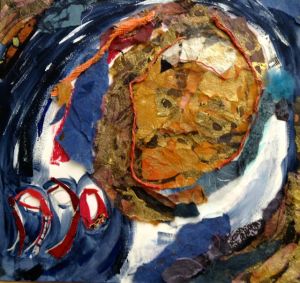 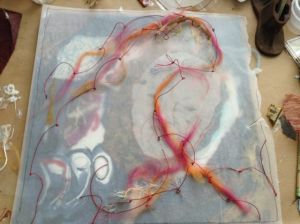 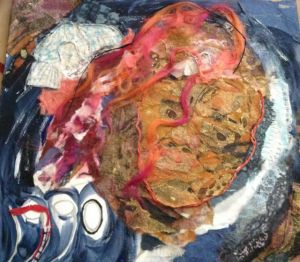 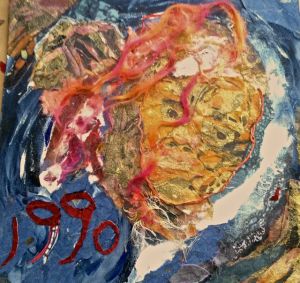 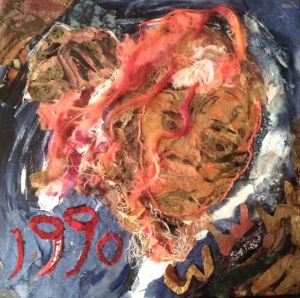 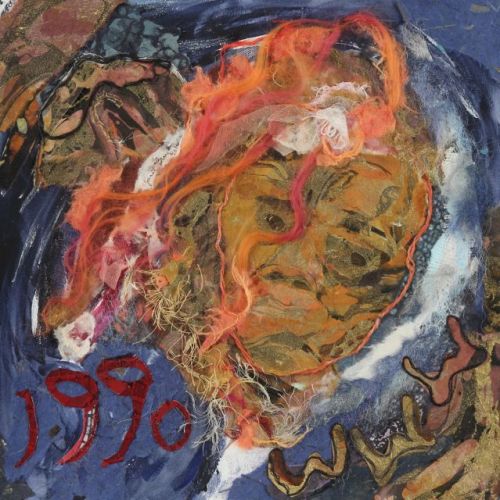 I see the world from many different perspectives. My curiosity has taken me to many countries. I enjoy learning about other cultures. I create art with texture, color and form. Most often I make mixed media artwork. I admire the creativiity of others.
View all posts by brugosjart →
This entry was posted in Art exhibit, Art Reception, mixed media art, Uncategorized and tagged 1990, ART, Grand Palais, mixed media art, Nelson Mandela, Salon Des Indepandants, Whirlpool Galaxy, www. Bookmark the permalink.

3 Responses to Launched and Released

A Pilgrimage Through Sanity.