It was an Arranged Marriage 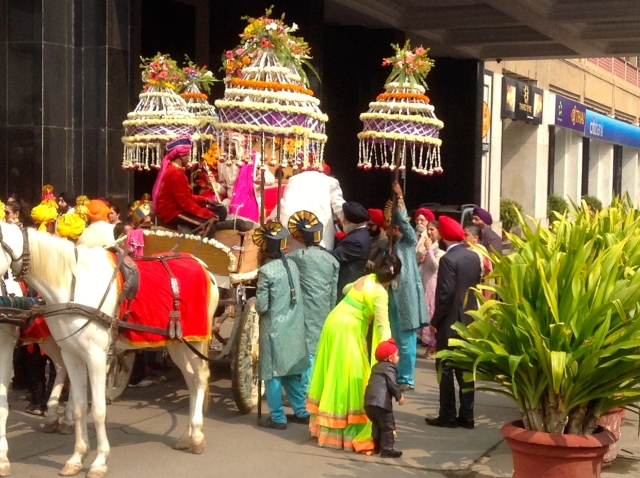 2015 Delhi Scene of an Indian Marriage

In an arranged marriage, the parents set out to meet the other family about which they already have some positive information. They check out the family thoroughly for financial stability, honesty, kindness, place in the community and look for possible difficulties to avoid. In my many conversations in India I gathered this information so it may not be universally true. Both sets of parents are looking out for the best interests of their adult children. I also got the sense that the parents really wanted the two young adults to like each other and would certainly not force a situation if either one was not in agreement. Generally, once a couple is married, they reside with the groom’s family. So many generations are living under one roof and caring for each other.

As a woman from a western culture, I completely honor my family, parents, grandparents, aunts, uncles, cousins, children and grandchildren. I have seen the caring for the older generation as my mother would have her mother come to live with us for nine months of the year. My grandmother would live with her other daughter, three months of the year.

As a child it was at times confusing as my grandmother was having some difficulties. What we now call dementia but as a child I thought her to be somewhat confused some of the time but not all of it. One time she had broken her arm. It had been in a cast for six weeks or more. Once the cast was removed the doctor said, “You may have trouble moving your arm.”  My grandmother looked at him while swinging both arms over her head and said, “What arm?”

Then other times she would take the stairs two at a time as she would see us children doing that.  I thought it was great because she was really old–in her sixties and could still do that.  Also another funny thing was whenever she spotted a grey hair in her thick brown locks, she would pull it out and be astonished that she would have one.

I loved having her live with us. We would talk and laugh a lot. She did have lots of rules and was very particular about table manners probably as she was the wife of an US Army doctor. My grandfather had been the doctor to General MacArthur. The rest of the Coley family was part of the military life style which included  a move every two years.

So that was my example of multi generational  living in one household.

For many years during and after my mother’s travel to India in 1976 after the death of my father, I would hear stories of India: of the people, the sights, the sacredness, the plight of women, the art and the architecture.

Briefly here are a couple of her stories:

Once on a public long distance bus high in the mountains, the driver was drunk. He was steering but not applying the brake. My mother got out of her seat and with her hands pressed the brake when needed. I believe she also may have taken over the driving of the bus later on and got it to a full stop. Eventually others came to rescue the passengers from this scary situation.

On another bus trip, my mother had the window seat. Her seat companion on the aisle had a small child. My mother offered to hold the child. She ended up holding the child for quite a long time. When she attempted to return the child to its rightful owner, the woman indicated that my mother should keep the child. It was so poignant as that mother was looking out for the best interest of her child. My mother could not accept but this child but it touched her deeply.

Then there were the train stories which is why no matter what, I needed to take trains in India. The one that has remained on the top of my consciousness is my mother was in a compartment. The conductor came by to lock the door so that no intruder could get in.  She awoke during the night  and saw that she had missed her stop. She pounded on the doors to no avail. Finally she got someone to unlock and open the door and got off the train. In the station she explained her plight to the station master who insisted that she pay for the extra distance she had traveled. She insisted that it was no fault of hers as she was locked in a compartment. Result the train master issued a ticket (free of charge) back to her original destination.

My mother, Lenore Coley Thomson, was a great traveler and loved to see the real life of a country—not just what the tourist was supposed to see. She had started her 1976 trip with a close friend. When that friend, who lived in New York, got word that her house had been burglarized, she said to my mother, “Let’s hurry up and do this trip in two weeks and then come back another time.” My mother responded, I am not going to return home in two weeks. I want to take the time to do it right. This savvy traveler continued her journey through many facets of India for nine months. She never returned to India but long live her letters, pictures and stories.

I traveled to India with my niece who was named for my mother. Lenore, my niece, was only able to stay for eight days. I unfortunately did not have the nine months my mother had, I stayed only three weeks. But unlike my mother, I plan to return as often as is feasible.

For me it is really difficult to explain how much I love India even though the seed for that had been planted many years before. I had prepared myself for poverty and begging. I was surprised that it was not as extreme as I had imaged though, of course, I did not go to every part of every city I visited. I was also prepared to be a target for those looking for an easy buck (or rupee in this case.)

I did see the encampments of pieced together fabric to make tents in parks. I did see people sleeping under bridges. Once, I nearly tripped over some outstretched legs, while going on the sidewalk of an underpass that was quite close to New Delhi Rail Station.

What I had not anticipated was how hard life could be for everyone. The streets are full of pot holes and wandering cows. The cows are sacred and can move freely anywhere they wish. Sidewalks, where they exist can also have holes, loose stones so walking is a watchful activity. For the most part  you walk in the streets where you watch for cars, holes or dung.   Your neck muscles get a work out as you look right, forward, left, behind, up and down all while moving towards a destination. As for train travel with  its many set of stairs you take to get to the correct platform is not for those timid or with weak knees.  The Americans with Disabilities Act does not have its counterpart in India at this time. Although I have been told that a new regulation will be passed that on night train travel, senior citizens 60+, would be entitled to a lower berth.

The temples, the Art, the Architecture were so alluring.  Many temples that I visited did not permit visitors to wear shoes, carry a bag or a camera. Those items had to be checked in a locker. A small fee was charged for a padlock. In places where only shoes were not permitted, you could check your shoes in bags and attendants who gave you a claim check.

I feel the utmost gratitude for my recent and first ever visit to the country of India.  I loved the art,  the color, the majesty of this country but most of all, I loved the people.

The kindness of people was extraordinary. For examples of this see: India Through My Eyes: Part 6 Sarnath and Introducion to Servas

Now I understand why I am having such a difficult time writing about the travels to India.  I have so much to condense, express and interpret.

How would I know that thanks to my mother, I was to have “an arranged marriage to the country of India?”  This marriage will not be at all ordinary– cultural difference and living apart for extended periods not withstanding.  What a wonderful inheritance my mother left me.

I see the world from many different perspectives. My curiosity has taken me to many countries. I enjoy learning about other cultures. I create art with texture, color and form. Most often I make mixed media artwork. I admire the creativity of others. Another joy in my life besides family and friends is the written word.
View all posts by brugosjart →
This entry was posted in arranged marriage, childhood experience, Contempory, Travel in India and tagged Acceptance, childhood oberservatons, contemporary, Dreams, family life, family traditions, Inspiration, tranquality, Travel in India. Bookmark the permalink.

3 Responses to It was an Arranged Marriage

The A to Z of Travel

Welcome to my travel blog! Check out my posts below and subscribe to keep updated!

words and music and stories

Let's recollect our emotions in tranquillity